Ridge Top II Apartments is one of three Low-Income Housing Tax Credit properties comprising a 38-building development known as Eisenhower Ridge. The post-Civil War era buildings were originally constructed in the 1880s as part of the larger campus known as the Western Branch, National Home for Disabled Volunteer Soldiers, later renamed the Dwight D. Eisenhower VA Medical Center (“VA Campus”). The VA Campus housed veterans for nearly 100 years until 1995 when a newer structure was built, and many of the buildings were vacated.

Ridge Top II’s six buildings consist of five three-story buildings, with the sixth being a two-story former Chaplain’s residence. The unit mix is 61 one-bedroom and six two-bedroom units. Under the 75-year land lease, housing preference must be given to veterans for the 163 units in all 38 buildings. In Ridge Top II, 88% of the units are occupied by veterans and all units are restricted to residents earning up to 50% and 60% of the area median income. Amenities include a community room, elevators in the five three-story buildings, central laundry facility, picnic area and on-site management.

Ridge Top II Apartments and the other two Housing Credit properties comprising the Eisenhower Ridge, sit adjacent to the VA Medical Center which offers credit counseling, food and nutrition classes, and medical care and treatment available to veteran residents of the properties enrolled in VA care.

Ridge Top II as well as the two previous phases were developed by Pioneer Group, Inc. based in Topeka, KS. Ridge Top II was syndicated and is asset managed by R4 Capital. 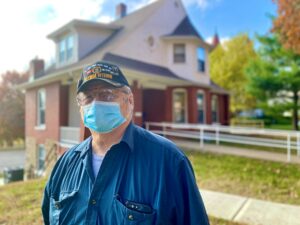 Ridge Top II Apartments resident George Muro, was raised in Kansas City, graduated from high school in 1964 and immediately joined the Navy. During his four-year stint with the Navy, he was trained as an electrician and worked on a tugboat search-and-rescue team in Alaska. In 1967, he volunteered to go to Vietnam and served 14 months on aircraft carriers in the Pacific as well as worked on boats on the Bach Dang River. After his honorable discharge, George worked at trade shows back in the US including the Goodwill Games until he retired. His health started to give him problems first with heart attacks followed by a diagnosis of diabetes, both attributable to possible Agent Orange exposure during his service in Vietnam. George came back to Kansas to be near his family and the VA Hospital at Leavenworth. No longer working, George’s sole source of income is social security and disability so having an affordable apartment is very important. He moved to the VA Campus two years ago into the renovated and repurposed Chaplain’s residence.

Notes George, “This is an unbelievable campus: beautiful housing, new appliances, a lake for fishing and seeing wildlife. I’m near a great hospital where my doctor is and there are weight loss, PTSD and other programs I can attend. The VA saved my life.” He went on to explain the community surrounding the VA Campus is supportive of veterans from area residents to local government. “Really glad I’m living here. Helps me with economics and the VA and my family. My dad, a WWII veteran is buried here, and I plan to be buried here, too. I’m home.”

Learn more about how the Housing Credit serves veterans here. 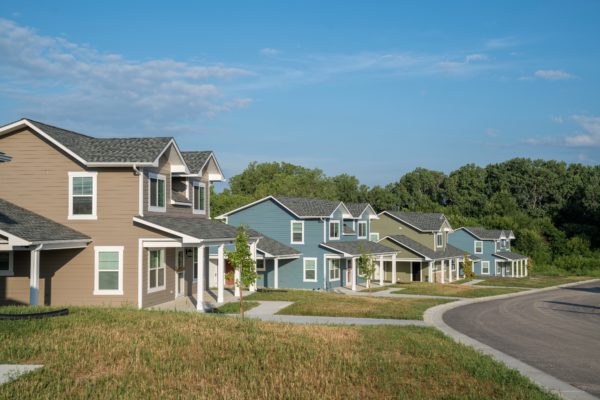