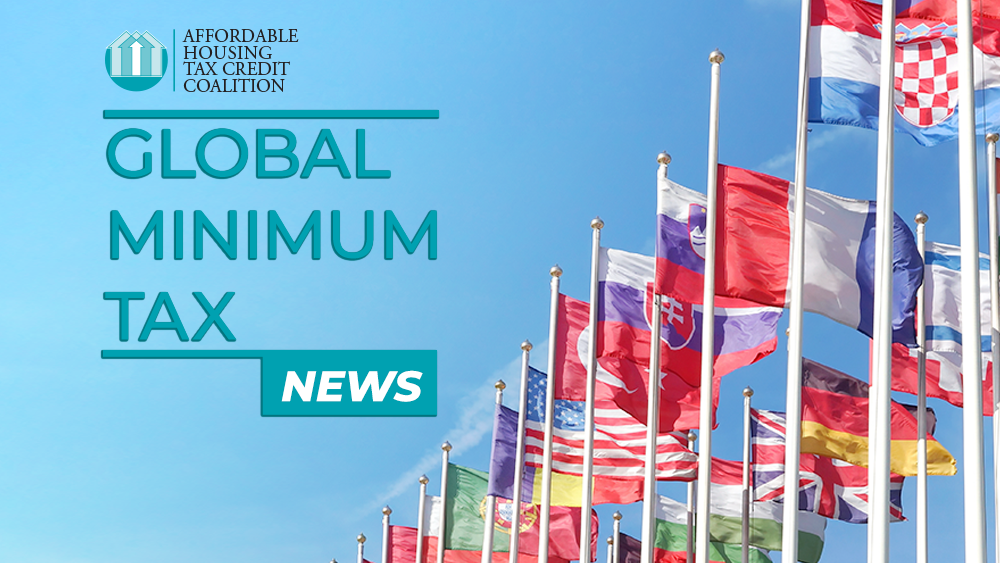 The AHTCC, as part of a group of 30 national trade associations representing community development credits and financing tools, sent a letter urging the Treasury Department to protect investment in critical programs like the Housing Credit as the Organization for Economic Cooperation and Development (OECD) progresses on developing rules implementing a 15 percent global corporate minimum tax. The minimum tax proposal has been agreed upon by nearly 140 countries as an effort to avoid a “race to the bottom” in which countries lower domestic corporate tax rates to attract foreign investment.

Under the OECD’s Pillar 2 model rules that would implement the minimum tax, large multinational companies paying less than a 15 percent effective tax rate domestically would be at risk of paying a “top-up” tax to foreign countries where the companies also do business. As a result, investors in the Housing Credit and other community development tax credits and financing tools could find their incentive to invest in Housing Credit developments significantly reduced.

The AHTCC and other groups emphasized to the Administration the impacts this proposal could have on the Housing Credit, stating in the letter: “A survey of major investors in the [Housing Credit] market found that minimally 48 percent of the equity financing, and likely much more, would be at risk if the new OECD rules were to move forward. Risking the loss of anywhere near this magnitude by disincentivizing these investments would devastate the impact of the [Housing Credit], which is responsible for virtually all the affordable rental housing built or preserved in America since its inception more than 36 years ago. It is very likely that such a disincentive will extend to other development finance tools.”

The Biden Administration’s fiscal year 2023 budget proposal released last week stated that it “would provide a mechanism to ensure U.S. taxpayers would continue to benefit from U.S. tax credits and other tax incentives that promote U.S. jobs and investment” as part of a new proposal to implement the OECD plan in the United States. However, details of this proposal have not been released, and as AHTCC Executive Director Emily Cadik shared in Bond Buyer (paywall), “We don’t know what the mechanism is but we’re certainly going to be continuing conversations with the administration and other policy makers to ensure the mechanism will indeed protect these credits.”

Initial responses to Congress on this issue have suggested that the Administration is considering refundability or direct pay models as a work-around for tax credits, which would fundamentally alter the structure of the Housing Credit model, and would require major action on the part of Congress. In contrast, the AHTCC’s letter urges the Treasury to work with the OECD to develop a new solution, which would necessitate the re-opening of negotiations on the Pillar 2 model rules.

The AHTCC is continuing to weigh in with Congress and the Administration on this emerging issue, including meeting with congressional leadership and working closely with our congressional champions, and will continue to provide updates to membership as this issue progresses.